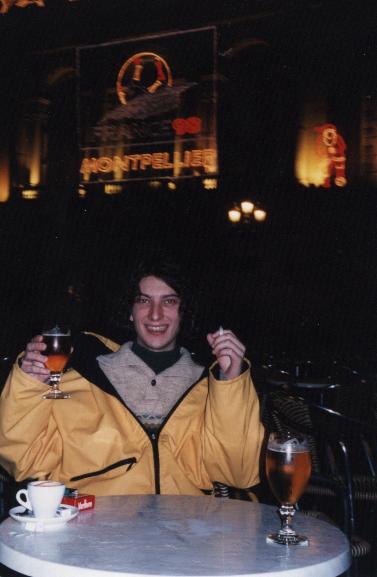 Marc was the underground artist of the group. He was doing photography, was hanging around with musicians, and I remember having been with him in an art exhibition preview. He was a good friend of Guillaume and Gaby, coming from the same city, and has often been partying with us too. Although he was maybe not one of my closest friends, after I left my studies and before I found a work, Marc has accepted me in his apartment during a few months, and I will always thank him for that! Marc is now living in Senegal, I think he is a web designer, but he is still doing photography.

In this picture taken on the 31st of December of 1997, there are several funny details. First of all, the temperature was high enough to allow us to have a drink outside on Place de la Comédie for this New Year’s Eve. As you can see in the background, the city was proud to communicate, on the front of the opera, that it was going to host matches of the Football World Cup of 1998. For Marc, who was not fond of football at all, it was fun to be posing with a beer below the “France 98” sign, like a football supporter.