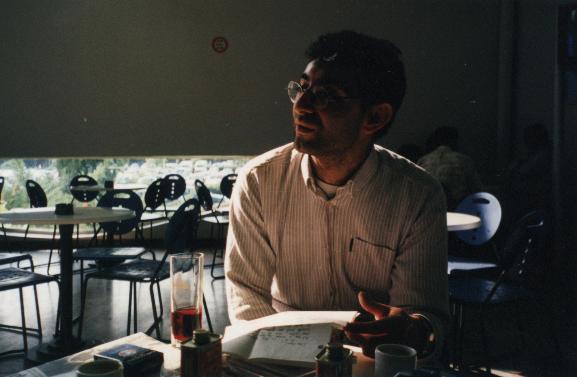 Babak was doing a PhD in computer science at the same time as me, at the LIRMM, University of Montpellier 2. I could have never met him, because he was actually not working in the main building with me, because of his nationality! I met him accidentally because at that time I was going regularly to the Rockstore, the famous indie-rock club and concert venue in the old center of Montpellier. At that time, the world wide web was just starting, and, as a student in computer science, I was having my home page on the web site of the university. I made a little homepage about the Rockstore, announcing the next concerts and parties, and sent a mail to all the laboratory to advertise about it. Babak replied to this mail, answering that it was a good idea, and that he wanted to do the same thing about the Psychodrome, a small underground bar in the center of Montpellier in which he was actually DJing once every week with a few friends for indie-rock-psychedelic evenings. That’s how we first met.

I followed Babak to the Psychodrome and there I met Pascal, and all the other group of friends from this time. We had a lot of parties at this time, and made new friends.

When Babak ended his PhD, he left Montpellier for a job in Ottawa, Canada. This picture was actually taken in the airport of Montpellier, the day of his departure!

After Babak’s departure, I stayed in the group of friends and we kept on having fun time. I stopped my studies, found a little job, lived a few months in Marc’s apartment… And then I finally visited Babak to Ottawa. I lived a month or two in his apartment, hoping I would also find a job in Ottawa! I’m grateful to him for that!

I actually found a job… in Nîmes, thanks to my older friends Michel and Bruno (who also studied with me and Arnaud too) so I came back to Montpellier! But Babak comes back to Montpellier almost every year for vacations, to meet the old group of friends of the late 90’s!